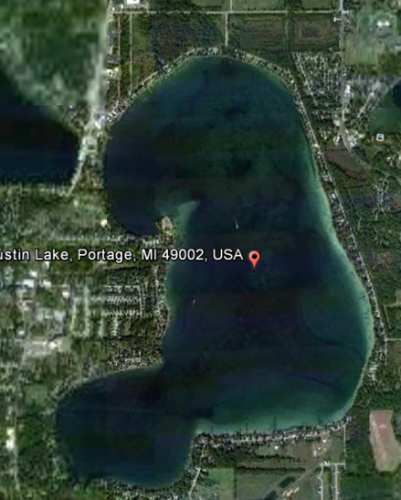 The 220 acre South Bay of Austin Lake has a serious muck problem. 40’ of decayed organic matter coats the bottom of the bay. More than a nuisance, this layer of muck contained toxic levels of ammonia releasing smelly hydrogen sulfide gas during summer months when the basin experiences severe oxygen depletion (anoxia). The phosphorous and nitrogen that exist in the organic sludge are fueling explosive weed growth. Worse, a 2012 report by Restorative Lake Sciences LLC stated that the condition of South Basin poses “an imminent threat to the health of the Austin Lake ecosystem.”

50 years ago the basin was connected to a natural wetland which filtered nutrients and kept the South Bay lake-bottom clean. Unfortunately, a road was constructed between the wetland and the South Bay which cut off the flow of water. With the loss of the wetland came a rapid accumulation of dead organic matter/silt (muck). South Bay became the dumping ground and now has a shallow dead lake-bottom (8’). To restore the South Basin requires getting it breathing again.

25 years ago a $300,000 poorly designed and ineffective ‘simple aeration’ system was installed by an engineering firm more interested in selling a $25 million dredging project – even though they were the ones who installed the aeration system. It failed.

In 2007 the residents of Austin Lake contacted Lake Savers. For five years we worked closely with the Austin Lake Riparian Association to educate the community about nutrient overloading, laminar flow inversion, and biological acceleration. We designed a cost-effective whole-lake strategy.

In July 2011 a base-line water quality analysis of the lake was conducted by Restorative Lake Sciences. In July 2012 we installed our Whole-Lake System and in October 2012 a second analysis was performed to measure results.