For the first time in over five years the lake surfaces are clear of algae mats with 6-11 inch reduction in organic sediment muck after only one year.

Baseline measurements of organic sediment muck were taken in April 2009 prior to installation of Lake Savers’ Lake Bottom Aeration and Biological Augmentation. Measurements taken again in September 2009 and 2010. 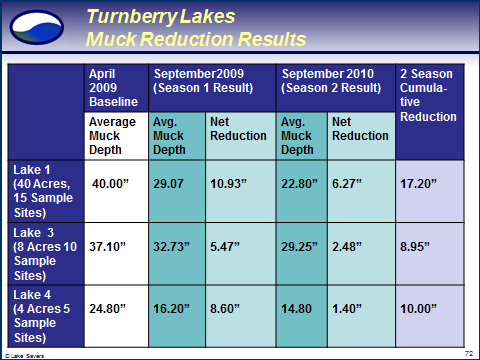 Turnberry Lakes is a remarkable example of a community collaborating to save their lakes, and the success of our technology. Prior to contacting us in the late summer of 2008, stakeholders had spent tens of thousands of dollars on chemical herbicide treatments to address the massive overgrowth of algae. After 5 years of herbicides, the algae growth was so thick that on the largest of the 4 lakes, saplings and grass were growing on the top of the algae mat in the middle of the lake.

The lakes were categorized as hyper-eutrophic – the most severely impaired designation on the trophic index scale. It was clear from the start that there were no “quick fixes” for each of the lakes.

In the spring of 2009 we implemented our system. Initially, algae growth remained heavy in Turnberry Lake #1 due to uncharacteristically high temperatures and heavy rains which mixed a tremendous amount of nutrient rich bottom sediments throughout the water column. All of the oxygen in the lake was quickly consumed by the accelerated decay process which, in turn, resulted in a massive fish kill.

Instead of losing heart or confidence in the newly implemented solution, the community rallied and committed to “zero herbicide” strategies for restoring their lakes. A coordinated clean-up effort was initiated to remove the dead fish from the lake and dispose of them far away from the lakes where the nutrients would not be able to return to the system. In addition, the community organized several “algae hoe-downs” to physically rake and remove algae from the lakes over the course of the rest of the summer. Many tons of algae were removed.

Toward the end of the 2009 summer, clear indications of progress started to emerge. More than 11 inches of muck reduction was realized in the first year of operation of the system. By September, the lakes were largely clear of algae for the first time in many years. The lake that experienced a fish kill was recovering very well and restocked Bass and Blue Gill began to thrive.

In 2010 the community again “doubled down” on its all natural restoration program by increasing the amount and frequency of Beneficial Bacteria & Enzyme Treatment (Biological Augmentation).

By early August 2010 the lakes were once again clear of algae and remained clear through the rest of the season. In the meantime, another 6 to 8 inch muck reduction was realized through the combination of oxygenation and aerobic decomposition of organics by the beneficial bacteria.