Lakes are in Crisis: Wake Up

Nearly half of all North American Lakes are in Trouble

Home / Lakes are in Crisis: Wake Up

Lakes are in Crisis: Wake Up

Denial ain’t just a river in Egypt. It’s a failure to comprehend the crisis of freshwater lakes world-wide. Here are the facts. 48% of all North American lakes are classified as eutrophic; 54% of lakes in Asia; 53% of European lakes; 41% of South American; and 28% of lakes in Africa.

A eutrophic lake is a lake that is so overloaded with nutrient pollution that human health is at risk. It’s our fault. Lakes and Reservoirs are in crisis because we’ve put them there.

The fertilizers, chemicals, pesticides and herbicides we use to grow green crops and lawns end up in lakes. Septic systems seep, water sanitation systems fail, human and animal waste enters the watershed unabated and lakes take the hit. In fact, lakes have become our final dumping ground – an aquatic compost pile.

HERE’S WHAT HAPPENS TO THE LAKE

As the watershed carries phosphates, nitrates and other chemicals into the lake, the lake gets overloaded with nutrients. These nutrients fuel explosive weed growth and harmful algal blooms. 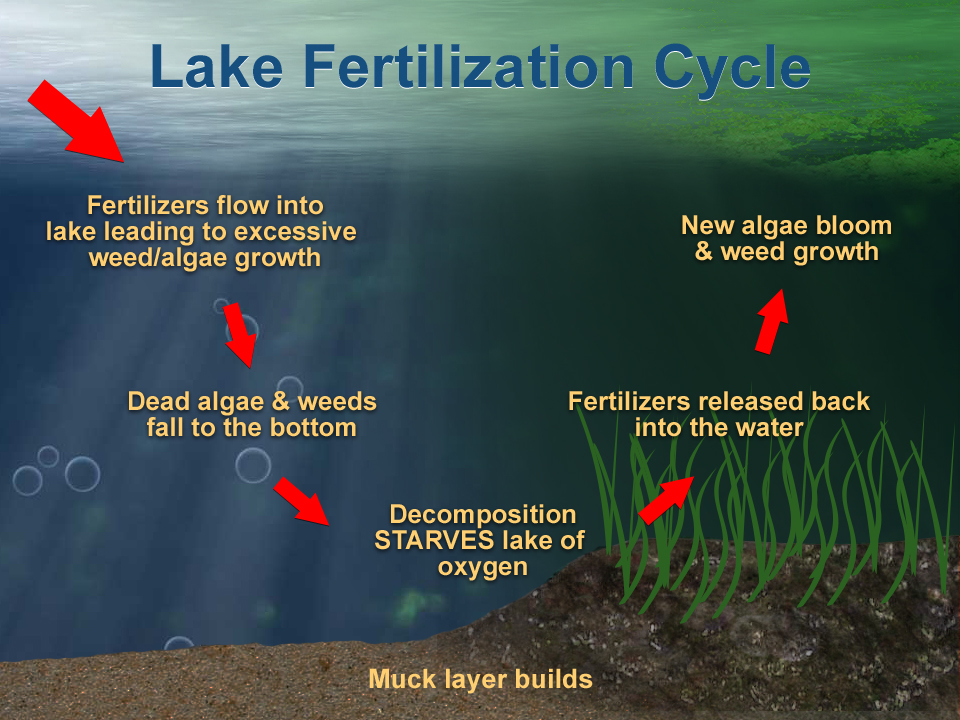 As the cycle of weed/algae growth, death and decay continues, so too does the amount of lake-bottom compost (muck).  This compost pile, in turn, continually feeds the lake more nutrients. The lake begins to internally overload itself with nutrients and the spiraling amount of dissolved oxygen sends the lake into a state of hypoxia and eutrophication. The lake suffocates. It’s a downward cycle. Dissolved oxygen is the life force of a healthy ecosystem. Without it, beneficial microorganisms that form the basis of the aquatic food web disappear.

HERE’S WHAT HAPPENS TO PEOPLE

Weeds and some algae are a nuisance. Toxic blue-green algae can kill you. In 2002 a 17 year old boy went swimming in a lake in Wisconsin. He developed nausea, began vomiting, and went into shock with seizures. He died 48 hours after swimming from acute heart failure caused by anatoxin – a type of cyanotoxin produced by blue-green algae.

When a lake becomes severely overloaded with nutrients (hypereutrophic), blue-green algae appear. When blue-green algae appear, animals and people who use the lake get sick. Children and the elderly are particularly vulnerable. Alarmingly, one doesn’t have to swim in the lake to get sick. Airborne cyanotoxin can enter the respiratory system. Living on or around the lake can also make you seriously ill.

HERE’S WHAT HAPPENS TO LAKE COMMUNITIES

When a lake is eutrophic, not only do people get sick, lake communities lose a valuable recreational resource and suffer economically.  A 2008 study by the Division of Biology at Kansas State University tied nutrient overloading in American recreational lakes with economic impact. The financial loss each year is astounding.

NO LAKES ARE IMMUNE

Every lake has been impacted. No lake in North America is immune. Wake up and smell the compost – weeds and algae are symptoms of much deeper problem – the accumulation of lake-bottom muck from decades of nutrient overloading. Weeds and algae are warning signs that your lake is in trouble.