Attack of the Mussels

North American freshwater lakes and rivers are under attack from two tiny invasive terrorists: Zebra and Quagga mussels. Introduced to North American waters in 1986 through discharged ballast water from transoceanic ships originating in the Caspian and Black Seas of Eurasia, their proliferation and subsequent environmental destruction has become a shared Canadian and US freshwater natural disaster. Photo by USFWS. 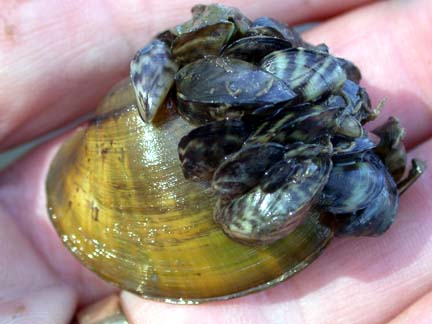 Since their discovery in the Great Lakes a short 30 years ago they have had a devastating impact, debilitating fresh water ecosystems, causing billions of dollars in damage to water management systems, fisheries, economies, and threatening human health. 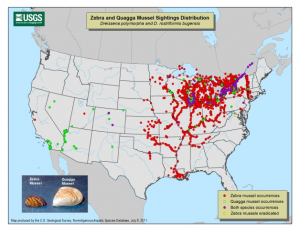 Europe has been unsuccessfully fighting this waterbody terrorist for decades. American fresh water lakes and rivers are now under siege.

Up to now, the focus has been on poisoning the mussels and minimizing their transport and spread. Many believe chloride and other chemicals are the only solution. Others believe the only way to stop their spread is to physically remove them from water systems and boats. Still others actually believe invasive mussels “improve” water quality. The most common misperception is that little can be done.

Nature Has THE Answer!

There is an emerging all-natural solution and we are committed to incorporating it as part of our whole-lake restoration approach. Scientists at the New York State Museum (NYSM) discovered a naturally occurring strain of Pseudomonas fluorescens bacteria that selectively kills large numbers of the invasive mussels without degrading water quality or killing other aquatic organisms. The technology attacks the digestive system of the mussels.