The independent studies conducted by Restorative Lake Sciences, LLC on Indian Lake, Paradise Lake, Austin Lake, and Keeler Lake are the most comprehensive analyses ever performed of large-scale use of laminar flow Lake Bottom Aeration and biological augmentation in severely impaired lakes.

According to limnologist Jennifer Jermalowicz-Jones, “This technology has been a highly effective tool for preventing severe trophic shifts in impaired lakes. In most cases, the benefits have been universal and consistent among sites, providing an increase in dissolved oxygen and water clarity, a decrease in nuisance algal blooms and organic matter, and may also be decreasing sediment and water column nutrient loads.““Though we’ve witnessed this happening on all the lakes we’re restoring, we are thrilled to have independent scientific data that proves it works” says Dr. William Bledsoe of Lake Savers LLC. 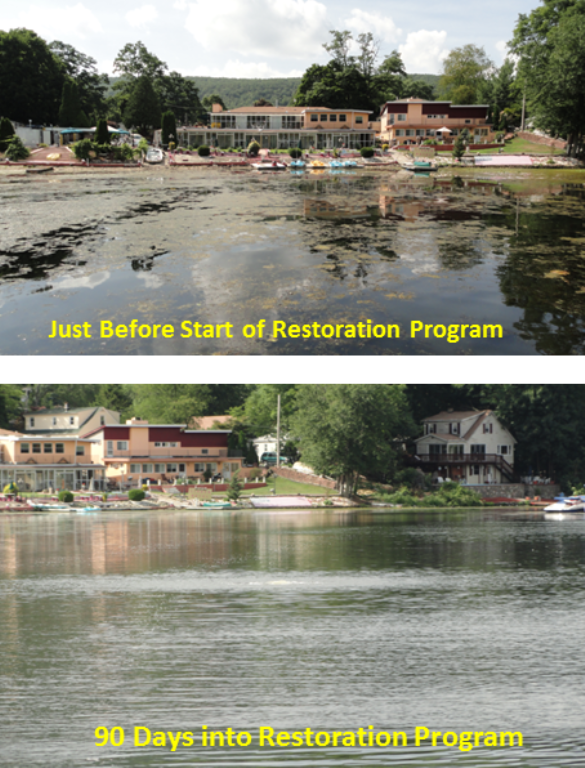 When asked about the remarkable results Lake Savers President John Tucci explained “what we’re doing is accelerating the lake’s natural ability to process phosphorous and other nutrients into the fish food chain and away from weed and algae growth. Laminar flow Lake Bottom Aeration is the starting point for this fundamental shift in the biology of the lake. In essence, we’re restoring the lake’s natural capacity to keep itself healthy and reduce the negative impacts of excess nutrient loading from the watershed.”

The remarkable success of this all-natural approach provides convincing evidence for chemical free lakes. According to George Hartley, former Water Quality Manager for Keeler Lake, “for about 15 years prior we had been using about $10,000 per year of chemicals for treatment of weed control. What we were actually doing all this time is putting a bandage on a major problem, without resolving the problem itself. We were killing weeds with chemicals and at the same time contributing to the already excessive muck problem that has persisted on our lake for many years, killing weeds that die and create more silt build up on our lake bottom. Not even coming close to actually resolving a problem.”

That’s good news for lake communities. It’s the best news yet for the thousands of impaired lakes in North America. “We believe nature always has the best answer” says Dr. Bledsoe. “With lake restoration this means restoring the lake’s inherent capacity to turn phosphates into fish.”