Accelerating the lake’s own natural mechanism for breaking down organic matter and converting nutrients into beneficial microorganisms that feed fish instead of weeds and algae. 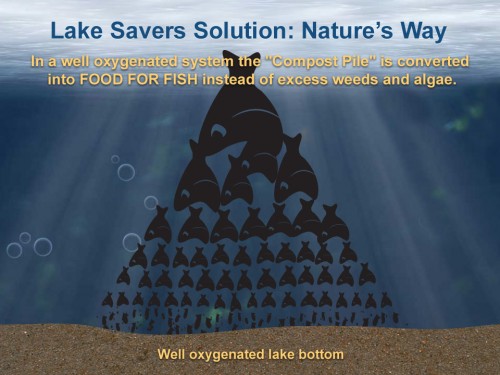 When the bottom of the lake is layered with dead organic matter (muck) it means there is an insufficient amount of aerobic bacteria on the lake-bottom. Aerobic bacteria are nature’s cleaning agents.

We accelerate the lake’s natural muck digestion process by adding aerobic bacteria which immediately and exponentially increases their population on the bottom of the lake.

Once the population of aerobic bacteria is boosted, we make it easier for them to digest/metabolize phosphorous and nitrogen by adding vegetable-based enzymes which soften/break down the tough cellular walls of dead organic matter. We then sustain their continual growth with Lake Bottom Aeration. Aerobic bacteria demand dissolved oxygen. Lake Bottom Aeration ensures that demand is always met. By adding both aerobic bacteria and enzymes and sustaining dissolved oxygen levels at the bottom of the lake…

We put the muck digestion process into hyperdrive.

Diatoms are one of the reasons life emerged from the swamp. Millions of years ago when the oceans subsided, land masses emerged, and runoff started to carry granite and silica into the oceans, a microscopic life-form emerged that scientists consider to be a fundamental building block of life itself – the diatom. 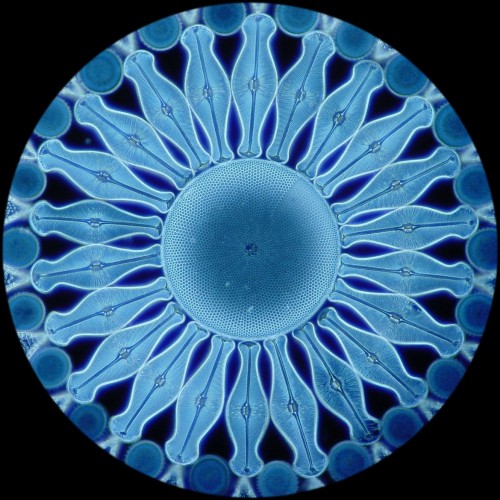 Diatoms are microscopic food power cells (phytoplankton) that convert carbon dioxide, nitrogen and other phosphorus into dissolved oxygen and oxygen rich organic compounds and zootoplankton which result in a healthy ecosystem and ultimately a thriving fish population. They play a dynamic role in nutrient conversion and regulation of ecosystems.  [Read more about Diatoms]

How Diatoms Benefit a Water Body

The problem is that they are boom-and-bust in nature. When diatom population is high, nutrients are converted to fish. When diatom population is low, nitrogen that would normally be converted to dissolved oxygen, phytoplankton, and zooplankton and released as CO2 gas in the atmosphere is instead utilized by explosive weed growth and toxic blue-green algae (cyanotoxin).  Diatom diminishment typically happens in mid-summer. The “bust” happens when the supply of silica, iron and other micronutrients fail. Diatoms need all these inputs.

One year after initial treatment in one of our highly distressed urban-environment freshwater bodies we’re seeing the development of higher order complex siliceous diatom species that are indicative of extremely high water quality environments (oligotrophic).

Results of our Testing

Stimulating Diatom Growth is quite simply one of the most promising breakthroughs in natural water body restoration developed to date.

Lake communities need their weeds and algae to go away now. Accelerating the lake’s natural nutrient reduction process through the growth and sustenance of aerobic bacteria and diatoms is nature’s way. Both form the basis of a healthy food chain. Biological Acceleration takes the liability of nutrient overloading and turns it into a resource for fish.

Read the results of a recent independent study that measured the effectiveness of our Bio-Acceleration technology in reducing muck, weeds and algae.